Today's guest is William Simon, who also writes as Will Graham. The first work of his I read was Mixed Marriages, which is delightfully creep and hysterically funny at the same time. 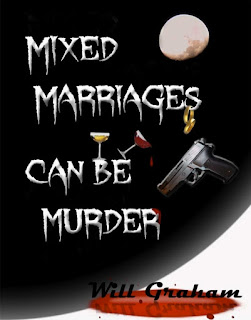 When I lived in Miami, I was in an older apartment building, probably built in the early 1930′s or so. I had the upstairs one bedroom 'suite': two apartments that had been re-modeled and connected.

Late night, got home around 2am. I hit the bed, was *just* dozing off, when I heard two explosions from the apartment underneath. To this day, I firmly believe the foot of the bed jumped, that's how powerful the noise was. Flew out of bed, called 911. The officers who came and I were friends, so I joined them to get the manager. She let them in, explaining the downstairs apartment was vacant at the moment. The police went through the whole place, and there was nothing. No squatters, no evidence of a break-in, no signs of anyone having been there for a while.

I *know* what I heard. I KNOW what I heard. The officers said, "Well, okay, but there's no evidence, no sign of anything. If it happens again, let us know." Manager locked up, I went back upstairs with no hope of getting back to sleep.

Flash-forward a couple of years. I had moved into another building with my girlfriend at the time. An older couple who had lived in Miami since 1935 semi-adopted us and we were frequent dinner guests, and vice-versa. One night, I mentioned casually I had lived at Such and Such on This Avenue. The husband paused, looked at his wife, and said, "Isn't that where the S------ thing happened?" She thought a moment, and nodded.

Then he told us the story.

Back in the 40′s, a young couple lived in the downstairs apartment. He went off to WWII, she stayed behind. Like something out of a bad movie, she had an affair with another man. When her husband got home one afternoon, he walked in on his wife and her lover.... and killed them both with a shotgun.

I didn't say a word about my experience..... but in the interests of full disclosure, I did hit the wine a little harder than usual at dinner that night.

William Simon also writes under the name Will Graham. His short story, "Mixed Marriages Can Be Murder" was originally published in the anthology Murder By Magic. It's now available as an e-book short story at Amazon, Barnes & Noble and other fine retailers