The Pillar of Light - Suzan Harden 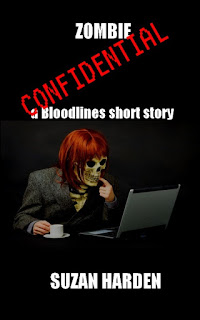 "I see dead people" is a great punchline.

Except when you can.

The "gift" as DH calls it (I call it something else, and it involves a lot of four-letter words) runs in my mother's side of the family. A few of us admit it we have it. Most of us don't.

You see, we learn at an early age if the ghosts are still semi-coherent and they know you can see them, they will not leave you alone. As my cousin Marie* puts it, "It's like strangers on the subway. Don't make eye contact, and don't engage."

Marie is also the cousin who makes a point of buying brand-new, never-lived-in homes. "So I don't have to deal with someone else's baggage," she says.

I always followed Marie's advice. Then I made my big mistake.

When my paternal grandmother showed up in the townhouse I shared with Marie, my automatic response had been to say, "Hey, Grandma." The teensy little problem was that she'd died three weeks before.

She talked about making pizza the next time I came over. It broke my heart a little, but I knew I needed to be firm. "Grandma, you do realize you're dead, don't you?"

"Why are you still here?" Frankly, her presence didn't make sense to me because she was a very devote Christian.

"I'm waiting for Dad." 'Dad' was her nickname for Grandpa.

So we made a deal. I'd talk to her as long as she visited when no one was around. Marie would have exorcised Grandma if she saw her.

For the most part, Grandma kept her word. Occasionally, I'd catch a glimpse of her out of the corner of my eye while in class or, years later, in court. I had to confess my secret to DH after he caught me apparently talking to myself. I'm lucky he takes the weird stuff in stride.

I flew home for Grandpa's funeral. Since my father's sisters and their husbands were staying with my parents, I got a hotel room. The morning of the funeral, I awoke to someone stroking my hair.

It was a rare thing to hear Grandma call Grandpa by his given name. I rolled over. "Hey, Grandma."

Grandpa looked at Grandma. It was the first I ever saw a shocked expression on him. "She can see us?"

Grandma: "And feel us too! I told you not to touch her and wake her up."

Grandma: "We can't stay long. We need to be in Columbus in five minutes. We just came to say our good-byes."

Grandpa (his attention switching between us, a bewildered expression on his face): "She can see us?"

Grandpa (looking over his shoulder at me as Grandma dragged him toward the western wall of the hotel room): "I can't believe she can see us."

That's when I saw the third, well, 'entity' is the best word I can use to describe it. It appeared to be a pillar of yellowish-white light, roughly six feet in height, hovering next to the dresser. A sound came from it, not quite music, but not quite singing either. It felt sentient.

When it realized I was staring at it, not at my grandparents' ghosts passing through the wall, I felt a surge of emotion from it. Shock, distress, surprise. I got the distinct sense that I wasn't supposed to see it any more than I should have been able to see my grandparents.

It drifted about a foot toward the bed. Curiosity replaced its surprise. Again, I felt its emotion. It was torn between figuring me out and staying with my grandparents. After a moment, it drifted through the same spot on the wall of my hotel room.

I glanced at the digital clock beside the bed. 7:29 a.m. I could catch another hour of sleep before I had to be at my parents' house.

Why did Grandma and Grandpa had to rush to Columbus, Ohio, of all places? The last of the family, three of my cousins, flew in the morning of the funeral. Jaye's flight, the last one, arrived at Columbus International Airport at 7:34 a.m.

*Even though my family will recognize the people I mention, I changed the names so they don't get harassed. Or summoned.

Confession time: I used my strange encounter as the inspiration for the ending of Zombie Confidential. The short story will be free until the end of November. It's available through the following retailers: