Sometimes you need a little K-Pop (aka Klingon Pop) after a really rough week.

This Is What Happens When I Make Plans

Laura's back to grooving' on Hero De Facto this week, only to have my life become...complicated.

DH's mom had minor surgery on Tuesday. Everything went well except a slight reaction to the anesthesia she was given. Then Wednesday, DH's dad wasn't feeling good. Turns out it was congestive heart failure. So DH is at the hospital with his dad, and I'm spending the day making sure his mom is eating, etc.

For some reason, Gnarls Barkley seems to fit right now.

You'd think with the indie publishing revolution that writers would give up on finding the ULTIMATE TRUTH. You know, that secret recipe or spell that would GUARANTEE a writer's success.

Now I'm seeing the reverse of the ULTIMATE TRUTH. Instead of hanging on every word that drips from the mouth of the experienced writer (or agent or editor, too, for that matter), there's condemnation from the new writer. As in, "How dare she?!"

We do. We get excited by a story idea or a publishing process. Even the most introverted writers want to share this cool, new "whatever" they discovered because it's cool and new to THEM.


2) The cool, new thing has nothing to do with you.

This one comes in three flavors. The first is the slightly jaded writer who makes a disgusted sound and says, "Everyone knows that." Um, no, everyone does not know. That's why new writer is so freakin' excited. She learned something cool and new TO HER.

The third version is author X saying, "How dare you tell me what to do!" Except ninety-nine percent of the time, the author Y isn't telling anyone what to do. She's just so freakin' excited that she can't stop talking about the cool, new discovery.

In all three versions, what writer Y is saying doesn't have a damn thing to do with writer Y. Yet, I see the Y writers get angry with the X writers because they believe the X writers are telling them what to do. Generally speaking, no, the X writers aren't. They're just so excited that they want to share.


3) Learning when to say something.

So many Y writers think that they have warn/protect/care for X writers.

No, they don't. Let them talk. Let the X writers get it out of their system. As long as they aren't endangering themselves or others (as in, dismemberment or death), nod sagely and say, "Uh, huh," every once in a while, just like you do with your significant other.

There are two exceptions.

One is dealing with scam publishers like Author Solutions and its subsidiaries. But also understand that even in this situation, the X writer may not listen to the Y writer.

In both cases, again, it's not about the Y writer. Arguing with the X writer won't get Y anywhere.


So what's the Y writer to do? Listen. You never know. Maybe the X writer really does have a cool, new idea that will work for you.
Posted by Suzan Harden at 7:00 AM No comments: Links to this post

Anybody else want to see a smackdown between Elsa and Annakin?

Jjjjjjjjjjjjj, the first book in the Nnnnnnnnnnnn series that I'm co-writing with Xxxxx Yyyyyy, won't be out by May 1. The original cover artist we wanted is booked through July already. We got off on the wrong track, but it was early enough (i.e. February) that I though we'd recover.

Then my Murphy-curse turned on Xxxxx. She's moving this week. Trust me, there's a long, involved story that's not mine to tell. Anyway, the poor gal's a little upset about missing a deadline, so please think good thoughts for her!

Will it be out this summer? Hell, yes! We're looking for a new cover artist. (P.S. If you are, or you know someone who is, a comic book artist, we'd love to see your portfolio!) The formatter and proofreader are lined up. And we have a detailed outline, so it's just a matter of finishing the last ten (or so?) chapters.

The good news is the new covers and print versions for the Bloodlines series are moving ahead. Not as fast as I would like, which is my fault, not that of the two lovely ladies doing all the work. But the latest cover has even DH *squee*ing in fanboy delight! 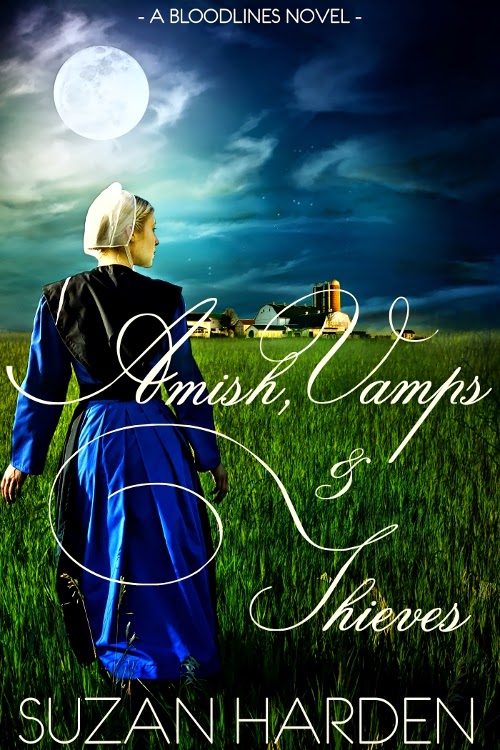 Okay, so I *squee*d, too!
Posted by Suzan Harden at 7:00 AM No comments: Links to this post

I'm seeing a lot of shit from writers lately. On blogs. In article comments. On Facebook. A majority of these folks are angry that their books aren't an instant success.

Or to be more accurate, their book.

I hate to say this, but you can write the greatest piece of literature in the history of the human race. It doesn't mean you'll find an audience the first time around.

Or even the sixtieth.

There are no guaranties in life, much less in the publishing world.

But each time you publish a new story, it increases your odds that someone will notice. Of course, that assumes you released a quality product. As in you have studied and learned the basics of storytelling if it's fiction or clear communication if it's non-fiction. As in you edited your story, or had someone else do it. As in you designed an excellent cover that signifies the interior, or had someone else design it.

But again, you can have the best editing/proofreading in the world and the best cover in the world, and it still doesn't guarantee success.

Putting out a new story is sort of like buying a lottery ticket. Yes, you're playing the odds. But you're playing with the belief in yourself and your talent.

You need an inherent belief in yourself. Without that, the lottery will fail you no matter how great your talent is.
Posted by Suzan Harden at 7:00 AM 1 comment: Links to this post

Okay, I have a thing for Wiz Khalifa.

If you're a fan of The Fast & the Furious franchise, you know that's been the overriding theme of the movies. I admit I thought the series was just another B-level testosterone fest until my son introduced to it. I'm ashamed that I was so judgmental.

And I'm finding it hard to write a review for this movie. But it comes when my own son is so very close to taking the wheel. The circumstances of Paul Walker's death while filming Furious 7 allowed my husband and me to have a serious talk with GK at dinner after the movie. About riding with friends. About accidents that have killed our family members. About trust.

As for the movie itself, the producers handled the necessary changes to the storyline and the need for Paul's brothers, Caleb and Cody, to finish the film with bittersweet sensitivity. If you're not a fan of the franchise, rent the first movie. If you don't get the emotional decision of Paul's character Brian in the first one, you're not going to understand this one.

And if you've fallen for the characters of this series like I have, make sure you take lots of tissues. You'll need them for the last two scenes of the film. All I'll say is Vin and company gave Brian the ending Paul couldn't have.
Posted by Suzan Harden at 7:00 AM No comments: Links to this post

What the Family's Doing for Easter

Why Diaogue Is Important for a Character

Check out the following clip from Supernatural.

If the actors weren't there, if all you had was a script with the character names blacked out, you still be able to tell the difference between Sam, Dean, Castiel, Bobby, Adam/Michael, Crawley, Eve, Charlie, etc.

Because each character is unique. Three-dimensional. And they each have their own verbal tics and cadence.

Here's an exercise for beginner and advanced writers. Get a partner. Each of you record a show that
the other partner has not seen, or at most, caught three or fewer episodes. (You can cheat and pick out a clip on YouTube like I did.)

Write down the dialogue for one scene, but with altered tags. Example: Dean would Character 1. Castial would be Charater 2. And so on. Or use highlighters, i.e. Dean would be blue, Castiel yellow, etc.

Trade pages and read aloud to each other. Every human (and angel) speaks with a particular rhythm. From the rhythm, word choice, inflection, and so on, write down your impressions of each character. Then trade back and see how close you were. In fact, I suggest watching the entire episode that your example dialogue came from to see the connection.

Study and apply to your characters

Why is this important?

Because you want your readers to feel that you characters are real. And because it's always hysterically funny when an angel mangles a human insult.
Posted by Suzan Harden at 7:00 AM 5 comments: Links to this post