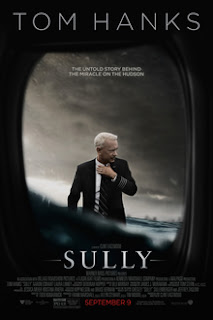 HBO and Showtime must be getting desperate for subscribers. They had their third(?) free weekend this year over the extended Thanksgiving holiday, so I tried to catch up with movies that I missed in theaters (and watch Deadpool a couple of more times despite having it on Blu-Ray, DVD, and a digital copy on my laptop).

First up is Sully, the movie based on Captain Chesley Sullenberger's water landing of a US Airways Airbus A320 in the Hudson River where all passengers and crew survived.

I'm not a big fan of Clint Eastwood's directorial efforts. His tastes tend to be depressing, but I am a huge fan of Tom Hanks (going all the way back to his Bosom Buddies days), and I knew this story had a happy ending in real life so I gave it a go.

It's been over year since the movie's release and nearly nine years since the incident on which this account was based, so I'm not giving my typical SPOILERS alert. I mean, seriously! The only way you could NOT have heard about the Miracle on the Hudson is if you were in the deepest, darkest part of the Amazon jungle...

And you were still there.

The framing event of the movie is not the incident itself, nor the rescue of the passengers and crew, but the subsequent National Transportation and Safety Board's investigation of the incident. I was a little bothered by the way the NTSB investigators were portrayed. It's their job to look at all the aspects of any such an incident or accident in order to protect the public by preventing that situation from happening again.

The movie shifts in time, as if flowing the free association of Captain Sullenberger's thoughts. It begins with him calling his wife just after he made it to shore. (It's not a funny scene, but both DH and I started laughing because the conversation was very similar to one we had in 1998. DH was in Nigeria and supposed to fly to Kenya the day the U.S. embassy in Nairobi was bombed.) Subsequent events are shown out of sequence, but the movie wasn't hard to follow.

Tom Hanks gave an honest, understated performance as Captain Sullenberger. He emphasized the humanity of the pilot: his fear for the safety of his passengers, his shakes after the incident, and his reticence at becoming a public figure.

Aaron Eckhart rarely gets any praise in his supporting roles, but he did a fabulous job as Sullenberger's copilot, Jeff Skiles. The two men's respect for each other shone through the actors' portrayal.

This is one of those movies that actually makes you feel good about the human race when so much horror contaminates our lives. Overall, I give it 9 stars out of 10.
Posted by Suzan Harden at 7:00 AM