What's That Light Ahead? by Guest Blogger Susan C. Muller 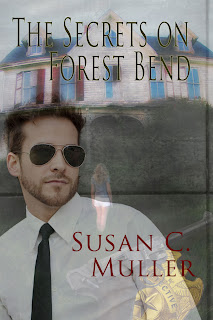 Suzan Harden sent me an email a few days ago asking if I wanted to write a humorous article for her blog. I almost burned my fingers with the speed I replied, “Yes.”

I didn’t see the need to mention to Suzan that I was running a fever of 101 at the time. I had already been to the doctor and was on antibiotic for a throat infection due to sinus allergies. I would be better by tomorrow and, if not, the day after.

The next day, even with aspirin, my temperature hit 102. I kept thinking, “I should get a glass of ice water. That would help.” I measured the distance from my sofa to the kitchen with my eyes and pulled up my afghan. Maybe later.

By the next day I felt much improved. My temperature floated through the 99’s, finally hitting normal by late afternoon. If only I wasn’t so tired. I didn’t have the energy to type, and I certainly didn’t find anything funny. But there was always tomorrow.

That was the day the side effects of taking those antibiotics hit. No writing today.

Finally, fever gone, upset stomach under control, still tired, but stronger, I decided to take a shower and wash my hair. That would perk me up. When I got out of the shower, I blew my nose. No big deal, just blew my nose. I’ve never been plagued by nosebleeds, but this one was a doozy. I couldn’t make it stop for anything.

Eventually, I lay down on the floor and propped my feet up. My dog didn’t like this at all. He didn’t know what was wrong, but he’d never seen me on the floor with a big wad of toilet paper in my nose, so he kept sniffing me. I’d pat him on the head, assure him I was okay, and tell him to go get in his bed. One minute later he’d be back, sniffing me again. I asked him if he wanted to bring me a bag of ice, but he just snorted. Isn’t that like a male?

After a while, my nose quit bleeding and I got up. Apparently, lying on your back with a nosebleed isn’t a good idea--the blood runs down your throat. The next thing I knew, I was gagging and throwing up. And back in the shower I went.

Today, I’m fine. All that is behind me and I’m ready to go. Or at least I was until I looked in the mirror. Now I have a big fever blister. Well, I may not be pretty, but I certainly feel better. I can see the light at the end of the tunnel; I’m just deathly afraid it’s an oncoming train.

But my publisher contacted me a few minutes ago. My novel, The Secrets on Forest Bend, is now available in print. I’m so excited. Even if that light is a train, I can handle it.

What about you? Have you ever had a bad week and lived to laugh about it?

Susan's book The Secrets on Forest Glen is available in e-book or print at Amazon and Barnes & Noble.

When Detective Adam Campbell learns that a WWII gun is connected to several murders he’s investigating, he hopes that tracking down the killer will be as easy as tracing the gun’s history. When he meets Jillian Whitmeyer, the last known owner of the weapon, the case becomes anything but simple.

Adam soon learns that people who get close to Jillian have a bad habit of turning up dead. Jillian claims that the spirit of her sister, accidently killed with that same gun, is responsible for the deaths. She warns Adam that he is likely to become the next victim. Adam’s been a lousy judge of women in the past and this one’s obviously a nut case. Or is she? How does a just-the-facts detective deal with a ghostly serial killer and the sexy-as-hell sister she won’t set free?
Posted by Suzan Harden at 8:00 AM