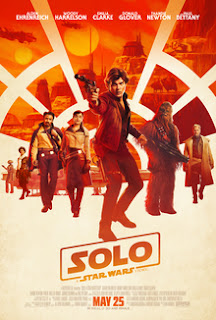 This is the movie those of us who were kids when Star Wars came out have been waiting for! Rogue One was good; Solo is excellent.

We won't talk about Episodes VII and VIII.


PROS
1) Bringing in Ron Howard as director to complete the movie was a smart decision. Ron GETS Star Wars!

3) Donald Glover was delicious as Lando.

5) The fabulous surprise cameo from someone from the Phantom Menace.


CONS
1) Alden Ehrenreich wasn't bad, but I think Taron Egerton would have been a better choice as the new Han Solo.

2) Emilia Clarke's Qi'ra felt too much like Daenerys from Game of Thrones.

3) A few too many "why the hell did they do that" holes in the plot (or maybe I've been writing fiction too fucking long).