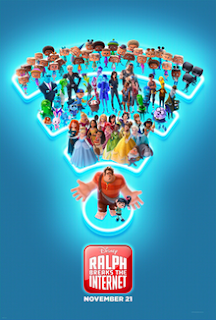 We didn't see the original Wreck-It Ralph when it was released. None of us were that interested because we were FINALLY laying hardwood in our family room. Eventually, we caught it late one night on cable and were pleasantly surprised by the story.

So when the sequel was released, DH was rather adamantly that we go see it. The reason probably has something to do with him being in the computer industry.


PROS
1) The Disney Princesses were hysterical!

2) Twisting the hero into the needy, neurotic nutcase and the heroine into the one wanting their freedom.

4) Felix and Calhoun adopting the other Sugar Rush racers.


Overall, Ralph Breaks the Internet is a fun movie with a lot of jokes that will fly over most kids' heads. I give it  8 stars out of 10.
Posted by Suzan Harden at 7:00 AM