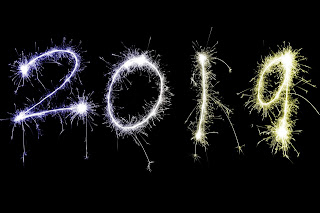 I started off by releasing the e-books of A Modicum of Truth (Justice #2) in February and Sacrificed (Bloodlines #8) in March.

And if you're a regular reader of my blog, you know everything got put on hold shortly after Easter.

I kept writing though, as best as I could. The trade paperbacks for this year's releases came out in October and December respectively.

I made some money, less than every other year, but more than my first year. However, I was mainly coasting on fumes from previous releases.

So I'm concentrating on putting out a lot of books in 2019. I'm not jinxing myself by giving specific dates until the pre-order is up and running. (Yep, I'm going to try to stay ahead this year!)

- Hero De Facto is back from my alpha reader. I'll do another round of proofreading before sending it off to my formatter.

- The first draft of Hero De Novo will hopefully be finished before Hero De Facto goes on sale.

- A Matter of Death needs to be completed as well.

- Then if nothing else goes wrong, I'll finish the last three Bloodlines stories and the fourth Justice Novel.

I'm still looking at the possibility of another surgery, so I'm trying very, very hard to get ahead before this happens, if it happens.

I could wail and gnash my teeth over perceived failures like a lot of my fellow writers do, but I can't. I'm just happy to be alive and doing something I absolutely love--making up stories to entertain all of you.

Mya you all have an awesome New Year!
Posted by Suzan Harden at 7:00 AM