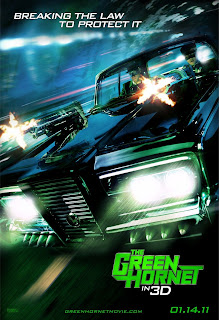 I hope everyone had a fabulous MLK Day!  Ironically, racism played a prominent role for the family this day.

As I said yesterday, DH and I dragged GK to see The Green Hornet this afternoon.  The movie had received some pretty bad reviews (not that I pay much attention when it comes to comedy or superheroes because some of these guys just don't get it).  One of the few positive reviews called it a story by 'R' writers trying to tone their schtick down to a 'PG' level.

Which I have to say is true.  There's definitely a frat boy feel with all the kick-to-the-nuts scenes.  This was definitely a Seth Rogan film, not a Christopher Nolan 'The Dark Knight' which has become the gold standard for the superhero films.

What this movie did best was in-your-face satire of the inherent racism in the original Green Hornet radio plays and the 60's TV series.  There's no equality here.  Kato's the super genius, the martial arts expert, the weapons master.  Hell, he even got the girl (or at least had her interest until he lowered himself to Britt's frat boy level).  The Green Hornet can't do shit without Kato.  Everyone knows it, and this film acknowledges it.

This film ably skewers both racism and the superhero image, and I loved The Green Hornet for that alone.
Posted by Suzan Harden at 9:40 PM