Speak And Speaking Out 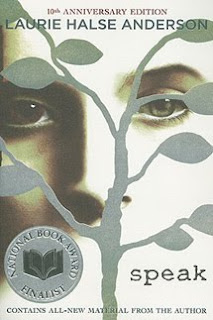 By now, most of you have heard about the latest YA controversy, this one involving Laurie Halse Anderson's Speak. For those who have not read this book, it's the story of a teen girl who was raped and her struggle whether or not to report the incident.

Wesley Scroggins, an associate professor at Missouri State University, wrote an opinion editorial that was published September 18th in the Springfield, Illinois, News-Leader. He called Speak pornography and a how-to guide for sex.

I thought long and hard about what I wanted to say on this subject. My problem--I still feel like puking every time I think about Scroggins op-ed piece.

How can the rape of a girl be considered sexually exciting? Or worse, that Scroggins finds such brutality exciting?

Men like Scroggins want women like Halse Anderson to shut up because it makes it that much easier for them to find and control their victims.

Not speaking out against rape is as wrong as the rape itself.
Posted by Suzan Harden at 12:36 PM