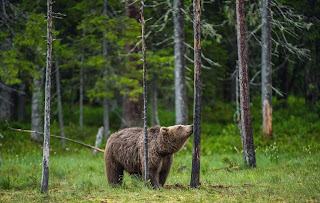 Does a bear shit in the woods?

I mean, really. Does it? I've never observed a bear taking a dump in its natural habitat.

However, I've been hearing a lot of whining on the interwebs lately.

Kids, no one makes us do art. And yeah, that's what writing is. Art.

Seriously, who's holding a gun to your head? Or a sledgehammer? If they are, you've got more serious problems than writing.

I don't know what's causing the latest stir. True, sales are down. But people have been trapped in their homes for over a year. The number of vaccinated in the U.S. is closing in on fifty percent of the population. Spring has sprung in all her glory. The daffodils died thanks to the late April snow we got two weeks ago. But damn, the lilacs outside my office window are making up for it.

People want to get outside! I don't blame them. I want to go outside, too!

After I get my words in that is. Not because someone is making me, but because I want to know what happens next.

If you don't want to know what happens next, then stop. No one's going to give you any shit. It's probably all out in the woods anyway.