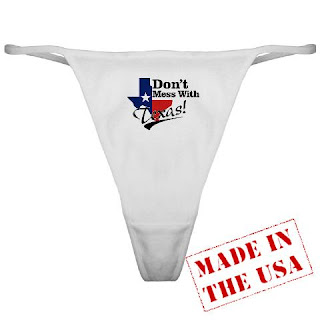 Several writers in the Houston area, including me, wrote to the Texas Department of Transportation in regards to Civil Action No.1:11-cv-726, i.e. their lawsuit against Texas romance writer, Christie Craig for alleged violation of the state's trademark.  The responses most of the writers recieved were generally dismissive and condecending.

So we're going over TxDOT's head, and we're asking all writers and readers to help.

Please contact Texas Governor Rick Perry and ask him to stop this travesty.  The main points that refute this lawsuit are:

1)  TxDOT's counsel admitted to Judge Sam Sparks in open court that NONE of TxDOT's trademark registrations apply to books.

2)  TxDOT claims that Ms. Craig's book ruins their reputation because it contains scenes between a heterosexual couple in a committed relationship practicing safe sex.  Yet, TxDOT believes selling men's thongs with the trademark clearly stamped on the front does not.

3)  TxDOT has not sued other entities using the title 'Don't Mess With Texas.' Other works using the title include a rap song, a magazine article and several country songs.  Please note that ALL of these other situations I mention involve an artist or a controlling party who is MALE.

4)  TxDOT is wasting money pursuing this action that is all likelihood they will lose when Texas is in a fiscal crisis.

We ask that you contact Gov. Perry directly and protest this lawsuit.

We also ask that you tweet, FB and blog this information.

Even if you don't live in Texas, this matter concerns you since Gov. Perry is running for President of the United States.

Please spread the word.  No government should bully a writer because they dislike that writer's content.  And frankly, this lawsuit is not about a trademark. It's an attempt by a state to bypass the First Amendment and harass a author based on her subject matter and her gender.
Posted by Suzan Harden at 7:00 AM