Coronavirus Pandemic Day 110 - Denial Is a River in Egypt 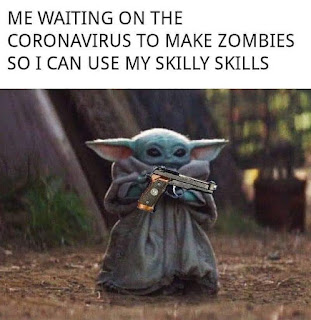 Denial of the seriousness of COVID-19 has been running thick and strong in the United States. However, reality is catching up with a lot of people's wishful thinking.

Greg Abbott was on the Texas Supreme Court back when I was first licensed as an attorney. To say he's right-wing is like saying Yosemite Sam likes guns. Now, Abbot is governor of Texas, and he very much was opposed to shutting down the state. He did so in March under duress. He also was one of the first governors to reopen his state.

But in all the years I've observed Greg Abbott, I've never seen him scared like he was at last Friday's press conference where he closed down bars and limited restaurants once again. On Friday, hospitals in the major cities were at 97% capacity.

By Saturday, hospital were full.

I still have a lot of friends who live in Texas. Hell, my son is currently stationed there.

And he was supposed to be sent to a new assignment next month. That likely won't happen either. Nor will he get leave for Christmas if he is still in the States. The Armed Services can't afford for that many people to get sick.

I won't even get into the hellscape that is Florida right now.

People talk about the second wave, but Holy Cthulu! The first wave hasn't crested yet. We didn't give it a chance to crest. Our leaders were in denial. A good chunk of the population were in denial. And now COVID-19 has a firm grasp on all our throats.

Not even Baby Yoda can save us now.
Posted by Suzan Harden at 11:30 AM